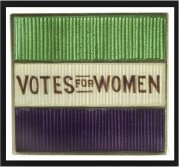 Perhaps I shouldn’t have been surprised to find that there were Cory ladies involved in the Suffragette movement but I was amazed when I came across one who was actually labelled as ‘suffragette’ on her family’s 1911 census document.

The form was signed by her husband, Henry William Cory (1867-1935), a Royal Navy pensioner, who had been married for 15 years to Nellie Whettem. She was born in 1873 at Bow, London. By 1911, they had only one child, Hilda May, who was eleven. They also had a servant, Edith Blanche Marshall who was 19, so presumably Nettie was not tied to the house. I wonder what part she played in the suffragette movement? Henry Wm Cory was born in Jersey and was the son of William Cory (born 1840 St Stephens, Cornwall) and his wife, Susan Arme (born 1844 Gromville, Jersey). See Cornwall Pedigree Table 13: Tresparett.

Militant suffragette movements called for a boycott of the census and many of their female supporters spent the night in church halls to evade the census. A further search of the 1911 census, using nothing in the name boxes but adding the word ‘suffragette’ on the form, revealed that the enumerator had had a very hard time whilst trying to collect a form from the female boarding house keeper at 30 Bouverie Road West, Folkestone. She was simply listed as a 60-year-old widow, and entered on the form as Mrs Smart Suffragette. Two unmarried female guests, both aged 40, were also in the household, and a female domestic servant aged 22, all of whom were entered as suffragettes. John Anderson, Registrar, noted: Mrs Smart refused to fill up the Schedule and the others refused information for the reason that they state women have no vote, – this Schedule is filled up on the authority of the Registrar General. In both the 1891 and 1901 census the householder at 30, Bouverie Road West was a Caroline Watley, a widow by 1907, and perhaps a suffragette by 1911. I haven’t found any connection to the Cory name but felt compelled to include her household for her determination and pluck!

Further references that I found whilst searching both Cory and suffragette were found through searches of newspaper articles. One was in the rather grandly entitled Yorkshire Post & Leeds Ingelligencer on 8 December 1913. Under the extremely long heading,

The article reported that four suffragette hunger strikers had been released from Armley Gaol the previous week but only one remained in Leeds. Hilda Burkett, known as ‘Woman B’, had been taken to a friend’s house in Leeds where she remained under police surveillance. During the weekend ‘Woman A’ and ‘Woman C’ left Leeds, one to Birmingham and the other to London; Clara Giveen, aged 23, attempted to disguise herself but was followed onto the train to Birmingham where the duty of keeping her under supervision was left to the local police.

Mrs Cohen, presumably ‘Woman D’ although not mentioned as such in the article, was still very ill but the police kept vigilant watch on her home. ‘Woman C’ had been stopping with Mrs [Leonora] Cohen, at the headquarters of the Women’s Social Union off St George’s Road, and yesterday morning a motor-car appeared outside the premises. The woman entered it and an Inspector on duty outside promptly boarded the car also. They were driven to the Railway Station, whence the woman travelled by the 1.10pm Great Northern Express to London, with the police still in attendance. We have previously stated that her name was believed to be Kathleen Jarvis. It is stated, however, that in the list of “martyrs” given in a Suffragette publication she is described as Miss Cory.

A search of online prisoners records revealed that although the names of Giveen and Birkett (entered as Birkitt) were listed with Woman C, she was recorded only under that name and so remains a mystery. She was charged with breaking 2 plate glass windows and 1 pane of glass, worth £17.15s., property of our Sovereign Lord the King at Leeds on 27 November 1913.

A report in the Portsmouth Gazette Evening News on 26 October 1906 makes interesting reading:

In the course of a sympathetic discussion on the good work done for the cause by the suffragettes in London, at a meeting of a woman’s society for political study (wires the New York correspondent of the ‘Daily Mail’), Mrs Cory, a prominent advocate of female Equality, gave a definition of a Utopian dream, which woman must not rest until she has realised.

Just who was this Mrs Cory? Who would have spoken so confidently and expressed herself so eloquently? I have found nothing to substantiate my supposition but author, Mrs Theodore Cory, came immediately to mind. On the night of the 1911 census, Mr and Mrs Theodore Cory were staying at The White House, Hampton Court, Hampton, Surrey. The householder was Theodore’s unmarried brother, Robert Wilberforce Cory (1878-1972). The brothers were from the Cardiff Cory family and descended from Richard Cory of Bideford, Devon, a colliery proprietor, who founded Cory Brothers with his brother John. See Devon Tree 4

Mrs Theodore Cory, (1873-1950) is better known as Winifred Graham, (Matilda Winifred Muriel Graham) and was a much published author of books for women whose subjects throughout a long career often courted criticism. One of her novels was The Enemy of Woman. The ‘enemy’ being the passion for the vote. I have found the entire story posted online by the Hathi Trust. This has been copied in its entirety from the novel originally held by the New York Public Library in 1915. It was published in 1914 by Mitchell Kennerley, who also owned the copyright, dated 1910. The theme of the novel was the effects that involvement with the suffragette movement could have on women and their families but one critic claimed that the author’s own personal stance was not evident. Copies of the novel are still available for sale online and it is considered an interesting reference for the suffragette movement. (The Women’s Suffrage Movement: A Reference Guide 1866-1928, by Elizabeth Crawford.) Elizabeth Crawford also records that Violet Cory was the secretary of the Mid-Norfolk Branch, (Market Place, East Dereham) of the New Constitutional Society of Women’s Suffrage in 1913. (The Women’s Suffrage Movement in Britain and Ireland: A Regional Survey) Violet Clementine Cory (1892-1969) was born and died in East Dereham. She was the daughter of Charles Cory, a Bank Manager, who married Emily Thynne Bobby in 1883. Violet remained single. (See Norfolk Table A14a)

One of the chapters in The Enemy of Woman describes the disruption of a suffragette meeting. Doubtless there were many disruptions of such meetings reported in newspapers at that time and I found one of a meeting of the Women’s Freedom Movement that was held in Cardiff in May 1906.

Mrs Fawcett and Mrs Despard, with local suffragettist leaders, had arranged to hold a meeting at Cory Hall. Their arrival was, however, awaited by a large crowd of opponents, most active amongst whom were students of the South Wales University College who completely disrupted the meeting with jeering and bell ringing. The speakers and supporters then abandoned the meeting, but as they left the hall the opposition invaded the platform. The suffragettes retreated to Ruskin Hall but were followed by the crowd, who maintained the din outside, and prevented the proceedings by the League till at length a strong force of police cleared the street. Five arrests were made.

On the following Tuesday morning two men were fined twenty shillings each for assaulting the police in connection with the disturbance at the suffragette meeting on Monday night. The police said that they had to fight their way through the crowd of two thousand and had to draw their truncheons. Two young men arrested on a charge of damaging Cory Hall, where the meeting was held, and smashing the Police station windows, were discharged.

The term “suffragette” is particularly associated with activists in the British WSPU, led by Emmeline and Christabel Pankhurst.  Emmeline Pankhurst (1858-1928) became involved in women’s suffrage in 1880. She was a founding member of the WSPU in 1903 and led it until it disbanded in 1918.