However, it was Reginald Radcliffe Cory (1871-1934) of the South Wales branch who is especially known for his association with Cambridge.  He was sent from Wales to study law at Trinity College in 1892 and was inspired by the special Botanic Gardens. In 1906 Reginald began to develop the garden at his family home at Dyffryn House, open today under RHS. The Cory house featured at the top of this page, is in Northampton Street, Cambridge and formerly belonged to Reginald Radcliffe Cory, and formed only part of his bequest (see Newsletter No 27) as well as Cory Lodge which is pictured below.

Reginald Radcliffe Cory gave generously during his lifetime, bequeathing much of his fortune to Cambridge University Botanic Garden, regularly making up the shortfall in the Garden’s running costs from 1919-34. Reginald’s bequest provided the Limestone Terraces in the 1950’s and new books are bought annually from the Cory Fund.  After his death bequests were made of his collections; priceless books to RHS Lindley Library; stunning porcelain to the Fitzwilliam and British Museums. (Tree English Corys: D1) See also Dyffryn Gardens.

Cory Lodge was built in 1924/5 as a residence for the Director of the Botanic Garden, and was converted to a library and administrative offices in 1984/5. There is a rose of the ‘shrub species’  grown at Cory Lodge called the Rosa xcoryana H which is a deep shade of pink, an example of which is featured on our home page. Reginald Cory’s cup is awarded each year for the best hybrid.  See more Corys in Devon

LONDON:  The Hundred Years War started in 1338 followed by the Black Death which came to England in 1349.  At Westminster and Windsor, John Cory, prince’s clerk, is mentioned in various documents connected to the Royal Court in the period between 1340-45.  Life at court was very unpredictable and he must have lived through some perilous times. To hold such a post in that century, John’s family must have had some influence and wealth.

Over 450 years later, William Cory (1783-1862), the founder of William Cory & Sons, was a farmer’s son born at Week St Mary in Cornwall.  By the early 19th century he had moved to London and gone into partnership with a coal merchant, a man called West.

The business prospered and by the middle of the 19th century ‘William Cory & Son’ (West had left) owned a fleet of colliers.  His sons William and Richard went into the business and by the time William Senior retired, he was a respected gentleman of Bloomsbury.  One of William Junior’s daughter’s, Hannah Taylor Cory,  married William Heward Bell and their son Clive Bell was a member of the famous Bloomsbury Group. Another daughter was Ann Maria Cory who married Harry Liddell.  Harry’s sister was Alice Liddell the original Alice in Wonderland. (Tree English Corys: F4) 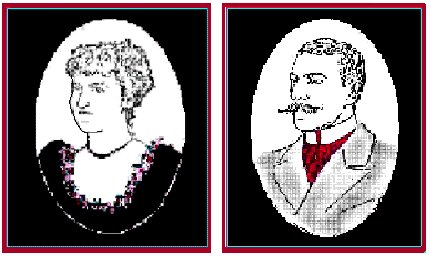 Sir Clifford John Cory, 1st Baronet (1859-1941) was the
son of John Cory of Glamorganshire, and married Jane Anne Gordon Lethbridge in 1893. Sir Clifford did much philanthropic work, especially in the welfare of miners. He established a number of institutes for miners in the Rhondda area and was very popular with them. He was the instigator of the support for the Ton Temperance Band, which over the years has had many name changes but this highly successful band is now back to being known as the Cory Band.See Newsletters No  29; 32; 42. It is not  possible to mention all their achievements here but you can watch the band in action and hear them play through this link here.

Lady Jane Anne Gordon Cory’s jewellery was bequeathed to the Victoria & Albert Museum, in South Kensington. The collection consists of garnets, amethysts, jade, rubies, emeralds, sapphires, pearls and diamonds. Some of these are presumed to be wedding gifts as details of jewellery were included in a newspaper report of Jane Anne’s marriage. The Cory Society arranged a visit to the Victoria and Albert Museum for their members in the Autumn of 2001 for a special emphasis on Lady Cory’s jewels.  The jewellery was displayed at that time in display case 19 in Gallery 92.  The museum catalogue showed that most of the case was taken up by Lady Jane Anne Gordon Cory’s jewellery. These Cory jewels were alongside cases of items from the Russian Crown Jewels sold by the Bolshevik government so they were in sparkling company.  (Tree English Corys: D1) Another part of the bequest was Lady Jane Anne’s embroidery collection, which the Museum declined and which is now in the Museum of New Zealand.

We learn from Winifred Graham’s Observations Casual & Intimate that Lady Jane was not the only Cory embroiderer living in London in the 1940s. The other was a gentleman, Sir Vyvyan Cory, a member of the other prominent Cory family in South Wales, whose early death at the age of 34 was recorded in the Debt of Honour of the Commonwealth War Graves Commission. See Cory Newsletter issue 21, page 5. (Tree English Corys:E2 )

William Johnson Cory was a fellow of King’s College, Cambridge.  He was a pupil at Eton from 1832-1841, and a master, from 1845-1872.  He wrote Ionica; Clovelly Beach, nine stanzas of  three-line verse- published in the Devonian Year Book 1931; and the famous Eton Boating Song, first published in the June 1865 issue of the Eton Scrap Book, the Royalties supplying the Drummond-Cory music prize, (Drummond being the composer of the music).

Yet he was not born a Cory but changed his name appending Cory to William Johnson. William chose the Cory name after his paternal grandmother Bridget Johnson, neé Cory, (baptised Marhamchurch, Cornwall in 1740) who was the daughter of John and Dorothy Cory of the Holsworthy line of mercers and clergy, a line that goes back to John Cory who was buried at Holsworthy on 22 January 1692 (Tree English Corys: H1 & H2)

A quote from the Alumni Cantebrigiensis reads:
“Very short-sighted, he is said to have pursued a hen down Windsor Hill, under the belief that she was his own lost hat.”

The strawberry tree and the crimson thorn
And Fanny’s myrtle, and William’s vine,
And honey of beautiful jessamine,
Are gone from the homestead where I was born.

I gaze from my Grandfather’s terrace wall,
And then I bethink how once I slept,
Through rooms where my Mother had blest me,
and wept,
To yield them to strangers,
and part with them all.

In 1792 at Christ Church, Commercial Street, Spitalfields, William and Martha Cory brought their 25 days old son to be baptised on 4 Nov 1792. William’s father was a cheesemonger living in Brick Lane. The London Directory of 1794 lists William Cory as a cheesemonger of Leadenhall Street and he is mentioned several times in various newspaper articles as going bankrupt each year between 1796-1798. He seems to have bounced back, as he was one of the jurors for the Coroner looking was a member of the Jury in 1797 at a Coroner’s court looking into the sudden death of a fellow parishioner, so not in debtors’ prison then! There is also an amusing report on a trial in 1809 where William Cory was a witness in the trial of someone who stole a wheel of cheese from the shop of his employer, Mrs Hills. This amusing story of someone who tried to steal a big wheel of cheese features in Newsletter No 46– Say Cheese!   Further research in census documents of 1841 and 1851 show another cheesemonger called William Cory, who was born in London in 1799 or 1801, was still living in London.

Search for more about the Corys who lived and worked in London; from Lords and Ladies, dock workers to Cory businessmen including plans of their holdings on the Newsletter list.

Many Corys left their towns and villages to seek better pay and job opportunities in London. One of these was James Cory born 1816 at Lingwood, Norfolk. He was the eldest son of James Cory & Elizabeth Chapman who married at Lingwood, Norfolk in 1815 and descended from Moses Cory (1767-1836) & Mary Kessingham. Moses and Mary had 7 children all born in Lingwood; Moses, 1792; Maria, 1793; Kezia/Thezia 1795; James 1797; Aaron, 1799; Jonathan, 1802; Matthew, 1804. Four remained in Norfolk and two joined the army; Jonathan served 41 years and ended up as a sergeant in the Coldstream Guards (whose conduct has been that of a very good and efficient soldier seldom in hospital trustworthy and sober) and became a Chelsea Pensioner but Matthew died in Poona, Bombay, India in 1928.

James, a carpenter, married Ellen Frances Collett in 1840 in the Whitechapel District in London and they settled in the area of Saint George in the East, where they had 4 children; Robert Collett Cory, 1841; James, 1843; Elizabeth, 1845-6; Ellen, 1850; Charles, 1855. Robert and Charles married and settled in the East End. Their descendants can be found in censuses in Mile End and Stepney.

Aaron married Phoebe Thwaites in 1825 at Caistor St Edmunds with Markshall, Norfolk and they had 9 children by 1842. The seventh child was George Cory who married Ellen Elizabeth Hailes in Norwich in 1863. They had 3 children in Stoke, Norfolk, before moving to Mile End sometime before 1870 where their 4th son, James, was born. George was working as a ‘Service Layer For Gas’ and can still be found labouring for the gas board in the 1901 census. His death is recorded in the Mile End District in 1907. Read more about Aaron and Phoebe Cory in Descended from Moses in Newsletter No 50