Peter Cory, a descendant of Richard Cory of Chesterfield explained how a mis-spelling of Swindon instead of Swinton had led to Peter and his brother, David, being unable to trace their Cory line further back than Richard and his time in Chesterfield. After visiting the Northamptonshire Records Office (after which Peter suggested Harpole should be renamed ‘Coryville’!) they discovered that Richard originated in Harpole, and so began to unravel Richard’s life. See more on   Corys of Harpole, Northampton

Richard was a man of the Industrial Revolution and travelled north to seek work in Chesterfield. Here he married a local girl called Ann Sayles (Sales) in 1859 and Ann gave birth to a son John Thomas Cory the following year. Richard was working as an iron puddler, which was highly paid work. The job was extremely, physically hard, very hot work, as it involved working with the furnaces, which melted the iron.

Richard and Ann moved to Bolsterstone, Stourbridge, in Yorkshire, where Ann died of ‘perpetual convulsions’ whilst in childbirth in 1864. She was only 23 years old. Richard buried Ann at St Bartholomew’s church, Old Whittington, Chesterfield. Afterwards, and probably because he was following the work, Richard moved to Swinton in Rotherham where he married Emma Walker and thus began another Cory line in that area. He went on to have a further six children with Emma, including another son called John- John Henry Cory.

Richard was 56 when he died, the last census entry for him was in the 1890 census where he was recorded as being an iron works labourer. 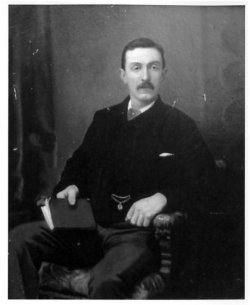 After his mother died John Thomas Cory (1860-1945) see photograph pictured right, was left in the care of his mother’s parents. He was well cared for and had a good education but after his grandparents died he drifted around, working as a coal miner and lodging at various addresses. John Thomas, in later life, never spoke about his father’s other family and perhaps did not know about them. He did not marry until 1905, when he was 45, and his bride, Lily Ashton, was 21. They married on Christmas Day, the only time they got off work. John’s age on the certificate went down to 40, and Lily’s up to 24! They had 3 sons; John Robert (1906); Harry J (1908); Horace H (1909). David Geoffrey Cory, Horace’s son, wrote two lovely articles for the Cory Newsletter about John and Lily’s life in Cutthorpe and his memories of time spent there with his grandparents.

During the Cory Event in Derbyshire Peter Cory read out some pieces from a book of personal memoirs written by his cousin Barbara Sowden’s father, John Robert Cory (1906 -1990). After Peter’s informative talk, David produced some interesting photographs, which included John Thomas (above) and the one on the left, of his three sons, Rob, Harry and Horace. Several other photographs of the family are shown in the newsletter articles about this family. (Trees:Harpole C5; Derbyshire & Leeds C6)