In the Cory families there are a number of officially granted coats of arms. There are also arms borne by the Corrie/Corry families with which the Corys have sometimes been confused. These are all described in Chapter 20 of The English Corys. The blazons (i.e. descriptions) and identifications for the Cory arms are as follows:-

The Arms: Sable, on a chevron or between three griffins’ heads erased of the second as many estoiles gules. Crest: Out of a ducal coronet or, a griffin’s head between two wings expanded proper. Motto: Vitus Semper Viridis. 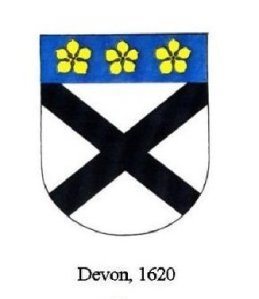 The Arms:  Argent. a saltire sable on a chief azure, three cinquefoils or. No Motto.

Cory (Visitation to Cornwall) 1620:
(not illustrated)

A reference to a church memorial coat of arms, formerly found in Jacobstow, North Cornwall states:-‘Cory, a genteel family, long resident in the counties of Cornwall & Devon, particularly in the Hundred of Stratton’.

Cory (London) 1620
(not illustrated)
Closely resembling the above, this presumably refers to a London emigre of the Norfolk Bramerton family.

The Arms: Or, three mullets gules, on a chief of the second, three griffins’ heads erased of the first’. No Motto.

The Herald’s Visitation in 1573 lists only four generations at Marhamchurch parish in the manor of Whalesborough:Thomas & William Cory 1543; Thomas Corie, 1569;  Thomas Cory 1581/2; Richard & Cory 1583. The information is deficient in birth and marriages dates and therefore limited.

The arms: Sable, on a chevron or, fretty gules between three griffins’ heads erased of the second, Crest: a curlew proper’.

Cory: Cumberland, Northumberland and Scotland. (Not illustrated).
From Burke, ‘General Armoury’ 1884, the date and holder’s name are not stated. The supposed, but quite insubstantiated connection with the Devon Corys is implied.

The arms: As West Putford Corys, but the chief sable replaces chief azure.

Rev. Henry Cory Eade M. A. of St John’s College, Cambridge, son of Elizabeth Wymond Cory (SO/4) & Matthew Henry Eade. Secretary to the Irish Church Mission upon his taking the name of Cory, in lieu of Eade, by royal licence 1864.

The arms: First and fourth or, three estoiles, two and one gules on a chief wavy of the last, an anchor between two griffon’s heads erased of the field for Cory. Second and third per fesse dancette argent and sable a pale counter charged three leopard faces of the second for Eade. Crests: First Cory a demi-griffon gules wings expanded vaire or and gules charges on the breast with an anchor or, second Eade, a demi-lion guardant proper collared sable supporting a cross pattee, fichee argent. Motto: Scutum Meum Jehova.

Cory or Corie (Not illustrated)

From Burke, General Amoury’ 1884. Again the date and holder’s name are not stated.

The arms: As Cumberland, Northumberland and Scotland but the crest differs: A griffin’s head gules between two wings expanded or, each charged with a mullet of the first. Again the Devon connection may be implied.

Richard Cory (SP/21) son of Wm Cory (SO/15), London coal  & shipping magnate, descended from Stratton Corys. The arms have some similarity with those of the Bramerton lines, but the two families are not related.

The arms: Argent, a saltire sable. On a chief azure three cinquefoils or. An excutcheon argent, over water proper, a bridge of eagle displayed sable, charged with a bezant for Lethbridge. Crest: out of a wreath of his colours a griffin’s head between wings expanded or, fesswise three roses gules. Mantling: Argent and sable. Motto: Virtus Semper Viridis. The saltire is retained.

Sir James Herbert Cory, (PQ/2) created a Baronet in 1919, was not a descendant of John of Cory Barton, West Putford. Arms derive from Cornwall Visitation of 1620.

Cory (St Mawes, Cornwall). (Not illustrated)
A memorial plaque to Rear Admiral Nicholas Cory (SO/1) (1795-1864) of St Mawes including a coat-of-arms is to be found in the church of St Just in Roseland, Cornwall. The admiral is known to be descended from the North Cornwall Corys who originated with Nicholas Cory (SJ/1) of Stratton. He was not related to Thomas Cory, who was of the Norwich line.

The arms, granted in 1693, are identical with those of Thomas Cory of London, (NL/25A) but with the motto Scutum Meum Jehova.

To learn more about heraldry descriptions and colours see: