The earliest Northamptonshire Cory name is that of  John Cory,  prisoner in 1394.  There is also a less ominous record of John Cory, landowner of 1442. There’s no further note of what became of either John. 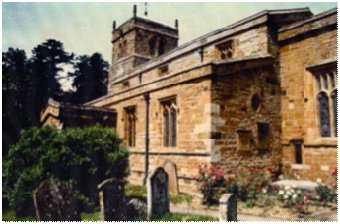 All Saints Holy Sepulchre Church, Harpole, plays a large part in Northampton Cory family history due to the large number of entries found in these parish registers. It appears that the Corys were well established in this area. The Society has record of four separate families in one village alone. Thanks to the diligent research by Marilyn Cory we have the pedigree of John Cory of Harpole. This line goes back 8 generations to Nicholas above.

Moving into the next century, Richard Cory’s house was built in 1703. During their visit to Northamptonshire in 1999, members of the Society were able to look round and see some parts that remain of the Georgian interior. The last  Cory occupant was Mary Cory Scriven, (born 1743) daughter of Richard Cory, Gent (born 1702) and Mary Smith. Further along the village is a shop that was once Cory the grocer’s, which was run, in the Harpole habit of using nicknames, by Nutter and Young Nutter.

From Harpole various Corys set off to seek their fortune, or misfortune, like Giles Cory below. Some did not travel far, just up to Derbyshire, follow this link to read about them. Derbyshire Corys

Another Northamptonshire church with Cory connection is the Church of the Holy Sepulchre is in Northampton, off Regents Square.  It was built like the round churches in Jerusalem and more information about it can be found here.

Giles Cory of ‘Salem Witch Trials’ fame was baptised on 19 March 1621 at the Holy Sepulchre Church in Northampton, although it is thought that his family originated from Harpole.

He is believed to be the son of Gyles Corey, (a maltser and a Freeman of the town) and his wife Elizabeth.

Giles arrived in Massachusetts probably before 1642 and is remembered for his cruel end in 1850 during the Salem Witch Trials and for when he was pressed to death after suffering medieval peine forte et dure (strong and hard punishment).

In 1868 Longfellow dramatized the event in ‘Giles Cory and the Salem Farms’ and in 1951 Arthur Miller based ‘The Crucible’ on the trial of Giles Cory.

Those who lie in Potter’s Field,
Will rise again, as surely as ourselves,
That sleep in honoured graves with epitaphs;
And this poor man, whom we have made victim
Hereafter will be counted as martyr!

More about  Corys who settled in America

Census documents have revealed that some Corys in Northampton were born in Norfolk. Robert Cory (born 1799, Heacham) & Sarah Edmunds had 13 children. They settled with their youngest children in the Hardingstone District. (Tree: Norfolk Corys: A1) In the 1861 census they were living in the High Street, Far Bottom, Hardingstone. Robert’s unmarried brother, Abraham Cory (born 1793), was living with them. The brothers were carpenters and Robert’s children were: Philip (1844)  a bricklayer; Robert (1847) later became a carpenter like his father. They married local people, as did two of their sisters, Sarah and Amelia.  Norfolk Corys

All Northamptonshire Tables can be viewed here.