John Cory of Shottery (1763-1826) who was born and buried in Harpole, was probably the son of  John Cory who married Mary Baker in Harpole on 28 Oct 1759.  See more of Corys of Harpole, Northampton

The Cory Event in Warwickshire in 2015 took us to Shottery and a meeting with members of The Shottery Village Association. We were greeted by The Revd. Canon David Capron, and on entering a lovely large modern parish room we all shook hands with the Mayor of Stratford, Worshipful Councillor Tessa Bates and the Mayor’s Consort David Bates, who live in Shottery and take active parts in The Shottery Village Association.

Marilyn Cory had laid out a comprehensive display of ‘John of Shottery’ documents and maps, and gave us a short talk on John Cory which left all of us amazed at his considerable wealth. His Will (1833) left several annual sums of £150 (worth £7,423.50 today) and an Inventory of stocks, crops etc. came to £4,712. 2s. 4d then,  but worth approximately £233,202.66 today. Members of the village association recognised other surnames mentioned by Marilyn during her talk, especially the Court family, and looked up references in the Church meeting minutes for the 1830’s but did not find John Cory in their records.

John’s first wife was Elizabeth Court, widow of William Roddis. (They married at Holy Trinity in March 1793 but he died in May). John married Elizabeth at Heyford, Northamptonshire on 16 Oct 1785. Three children were baptised in Coventry to a John and Elizabeth Cory there; John (1790); Thomas (1792); Hannah 1794 but can not be confirmed as from this marriage. Elizabeth died in 1802 and is buried at Holy Trinity, Stratford.

On the shorter of the two pathways leading to Holy Trinity Church, (not the path where Isaac’s memorial stone was discovered, see below), you will find etched into four large pavers on the walkway, E.CORY, W.COURT, I COURT and E. COURT. Adjacent to these, and still standing on the lawn, is a very solid, quite large memorial stone with the inscription, “In Memory of Elizabeth Cory, wife of John Cory of Shottery in this Parish, who departed this life 15th December 1802. Aged 39 years.”

Among the many documents on record for John Cory are legacy receipts to Elizabeth Ashwin, wife of Edward, S/A, draper, administratrix of the will of John Cory, Shottery, gent., who died 8 January 1826, from the said: Elizabeth Ashwin; John Cory; Ann Clayton, wife of Richard; Isaac Cory; Caroline Cory; and William Cory, children of the deceased. From this we can see which daughters were married when their father died, and the names of their husbands. Searching for records before 1837 registration began can be difficult if people marry away from their home parish.

John’s second child and first son, named traditionally, John Cory,  was born in 1832 at Old Stratford but emigrated to South Australia where he married Julia Corcoran, from Ireland, in 1867 and,  we are told, there were 7 children born to this generation too. Anne Gamble / Cory died in 9 November 1891 in Caen, France. She had been living there for some years with her unmarried daughter Emily who also died in Caen, 13 November 1904. Emily’s occupation was schoolmistress or governess. Descendant, Margaret Whitehead,  has a copy of a photo of Anne that Emily sent to her brother, her great grandfather, John Cory, in Australia, she believes about the time of their mother’s passing. She also has a copy of Anne’s death notice, in French, which gives the names of her children, also her maiden name of Gamble. Such personal information has enabled corrections to the original information in Newsletter No 67 published in August 2015.

On the way into Holy Trinity Church to see the 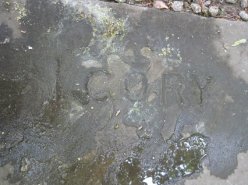 graves of William Shakespeare and  his family members, which are immediately in front of the altar, we made a discovery of our own. As we walked along the wide stone-flagged entrance pathway, we noticed names chiselled onto some of the stones. One stone was immediately under a leafy tree where birds sat and do what birds do. So by splashing water and rubbing we were able to read I CORY. As the fifth child of John of Shottery was Isaac Cory, 1815-1841, who was baptised and buried at Stratford, we thought it might refer to him. We asked officials inside the church if there were records for these stones but although they had researched and produced a catalogue of gravestones, these path stones had not been researched. We were told it is thought there are tombs underneath the path but they had not been investigated as the brickwork was crumbling. Vehicles are therefore not allowed on this wide path.

Isaac Cory (1815-1841) married a Stratford girl, Sarah Smith at St Philip’s Church, Birmingham in 1836. There were only 3 children born to this marriage as Isaac died early in 1841, so on the night the census enumerator called, there was only Sarah present with 3 young children; Isaac, age 3; Mary, age 2; Sarah, age only 1. They were living at Drayton, Old Stratford, where Sarah, recently widowed, gave her occupation as farming. By the time of the next census, Sarah had moved to the Garrick Tavern, High Street, Stratford on Avon. She was an innkeeper! All three children were at school, and she had a servant to help her, but Sarah died the following year, aged 44.

Her son, Isaac Cory (1838-1903) married Sarah Ann Findon in 1864, with two sons by 1867. The first, Frank, died shortly after he was born in 1866, and the other son, Charles Isaac, although born in 1867 wasn’t baptised until 1872. Isaac was a clerk at the brickworks, but according to the Worcester Journal of 20 August 1887, Isaac was jailed for 3 months for embezzlement, 31 cases totalling £112.12.5d from his employer. There is no way to know if he ever worked again, as our information is mainly derived from census documents, so we can only see that by the next time the enumerator came to call in 1891, Isaac Cory described himself as a retired accountant. His wife had 3 young children boarding, and described herself as a laundress. They were living at Barr Common, Great Barr, Walsall, Staffordshire, but returned to Stratford where Sarah died in 1901 and Isaac died two years later.

For more about the 2015 Cory Event at Shottery and Stratford-on-Avon, search for Newsletter No 67 .

John Cory, born in Stratford in 1832 married Julia Corcoran at Kilanoola Station, Robe, South Australia in 1867. What spirit of adventure drew him there?